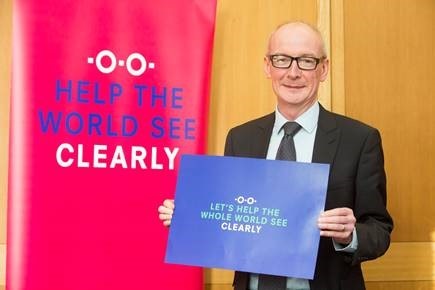 Pat McFadden MP for Wolverhampton South East has put his support behind Clearly -; a campaign to bring clear vision to the 2.5 billion people worldwide denied it as quickly as possible.

At an event held in parliament this week, Clearly demonstrated the simplicity of the solution to uncorrected poor vision by inviting MPs and peers to take a simple vision check using a smart phone app, powered by Peek Vision, and put on a pair of glasses (see image).

The Clearly campaign has had support from celebrities such as Annie Lennox, Lenny Henry, James Corden, Brenda Blethyn and Niall Horan from One Direction. They have called on Commonwealth leaders to put poor vision on the agenda of the Commonwealth Heads of Government Meeting in London in April.

“Shockingly, a third of the world’s population, 2.5 billion people, suffer from poor vision, which is the world’s largest unmet disability. Nine out of 10 of these people just need a simple pair of glasses -; a solution that has been around for centuries and can be produced for as little as £1. I’m joining the Clearly campaign and calling on the Government and Commonwealth countries to put ‘vision for everyone’ on the agenda of their Heads of Government Meeting in London in April.”

James Chen, founder of Clearly said:
“I am delighted that Pat McFadden MP has joined our campaign to help the whole world see clearly. This is an issue that has largely been forgotten but the solution has been on the end of our noses for centuries. Getting this issue on the Commonwealth agenda is a critical step to ensuring that those without clear vision are able to participate fully in life and fulfil their true potential.”