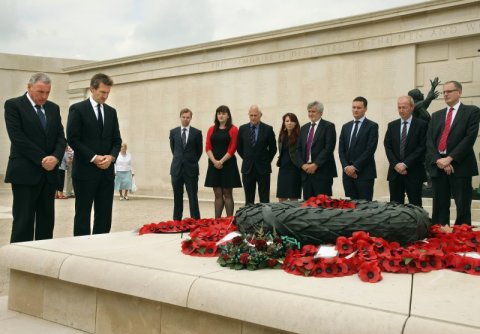 Pat and fellow MPs including Shadow Secretary of State Vernon Coaker on a visit to the National Memorial Arboretum near Lichfield.

Pat recently visited the National memorial Arboretum near Lichfield. The visit was organised by Dan Jarvis MP, who runs Labour Friends of the Forces. A number of MPs and parliamentary candidates were present. The visit began with a talk on the work of the Arboretum and was followed by a tour of a number of the monuments which have been erected over the years.

These included the Basra Wall, the Polish War memorial, the Paratroopers memorial, The Royal Navy memorial and finally the Wall of Remembrance which records the name of every service person killed in action since the end of World War II.

“I had been meaning to visit the National Memorial Arboretum for some time and am grateful to Labour Friends of the Forces and the Arboretum staff for organising the visit. It is a very big site and there are memorials of great interest all around it. Some are modern like the new Royal Navy memorial. Others are much more traditional. Some are recent such as the Basra Wall and the soon to be constructed Camp Bastion memorial. I would recommend anyone who has not visited to do so. It is a moving and sobering experience and the Arboretum and the memorials within it are a great asset to the country.“