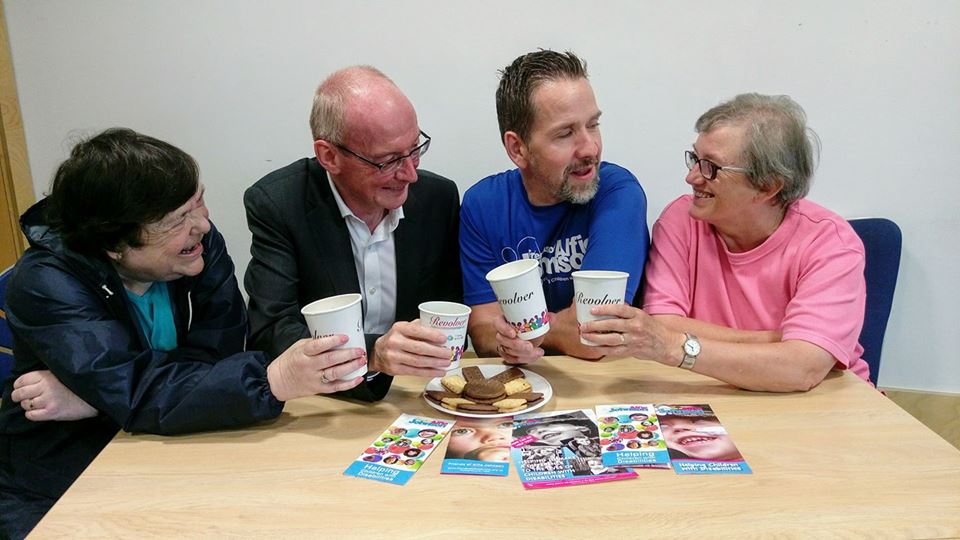 Pat McFadden MP has joined forces with Wolverhampton Coffee Provider ‘Revolver Co-operative’ to support a local charity which offers financial support to families who have children with disabilities.

Alfie John Arthur Johnson was born on Remembrance Day, 2007. He was born lifeless, and blue after what was thought to be a ‘low risk’, natural birth. Nine years on, Alfie’s family pursued a tough legal battle where the hospital admitted negligence which caused Alfie’s brain damange. In his name, they set up the charity ‘Friends of Alfie Johnson’, their charity is solely committed to helping children with disabilities in the Dudley, Sandwell and Wolverhampton Borough’s of the Black Country.

Over the years they have helped many children and their families by purchasing specialist equipment and funding services to enhance the quality of their lives. All of this is possible through the fantastic support we get for our fundraising events and the kind donations of so many kind-hearted people.

Wolverhampton South East MP Pat McFadden has joined forces with local coffee provider ‘Revolver Co-operative’ in order to support the charity. And last week they hosted a coffee morning at a school for disabled children (Green Park School, Green Park Avenue, Bilston) in aid of the charity to raise awareness and raise a few pounds for the charity.

Pat McFadden said, “I met with Paul Johnson who is the father of Alfie Johnson. Alfie’s a ten year old boy from Stourbridge and he was born with severe disabilities and in Alfie’s name his parents and friends have set up a charity, the ‘Friends of Alfie Johnson’. The focus of the charity is to help disabled children in Wolverhampton, Dudley and Sandwell and this year we’ve partnered up with the charity to raise awareness about Alfie’s case and children in a similar position. And also to raise some money for a good cause. So, if you want to find out more or donate, please go to; www.friendsofalfiejohnson.org.uk and there you can learn about Alfie’s story and about how you can help children in a similar position in the Black Country. It was great to have people from all over Bilston come out last week to support the charity”.

Paul Birch, Director of Revolver Co-operative said, “I’m pleased to team up with Pat to support the charity. It’s heartbreaking what happened to Alfie and how it affected his family too. We will do our very best to try and raise as much money as possible for the charity this year and raise awareness of Alfie’s plight”.

Alfie John Arthur Johnson was born on Remembrance Day, 2007. He was born lifeless, and blue after what was thought to be a ‘low risk’, natural birth.

He was taken to the Specialist Care Baby Unit for observation. Hours after his birth, his parents were given the heart-breaking news that he had sustained brain damage through oxygen starvation. Euphoria quickly turned to utter devastation. After 3 weeks in hospital, he was finally allowed home.

The injuries Alfie sustained during his birth have left him with a number of complex conditions. He suffers with Cerebral Palsy, Microcephaly, Seizures and Dystonia. He is also severely visually impaired/blind. His condition has left him without the ability to walk, talk, sit unaided, feed or drink and is reliant on a number of anti-convulsing and spasmodic medications and is fed via a gastrostomy tube in his stomach. Alfie also suffers with a severe scoliosis of the spine, which has now undergone urgent surgery to help correct it, taking great pressure off his internal organs.

Alfie will need specialist 24 hour care for the rest of his life as a result of these injuries.

Months after Alfie’s birth, his parents took the difficult decision to take legal action against the hospital in charge of his care. After investigation, it was proven that the hospital had indeed caused Alfie’s injuries, who finally admitted they had been negligent in his care that had led to him suffering severe brain damage. Alfie will now be taken care of for the rest of his life as a result of this action.

In spite of his injuries, Alfie Johnson is a loving, caring little boy with a heart of gold and a beautiful smile. His ability to deal with his condition and the pain and discomfort he experiences on an almost daily basis, is truly amazing. He is a remarkable individual and a true inspiration to his parents, family, friends and indeed everyone who meets him.

Alfie’s life will always be a tough one and he faces a lifetime of hospital treatment, surgery, therapy and will be reliant on specialist medication for the rest of his life. But he is a fighter, and a tough one at that. Whatever life throws at Alfie, he will always have the love, support and care of his parents, family and friends, and through the Friends of Alfie Johnson, his legacy will live on in his name, helping little boys and girls just like him.